Pimping ain’t easy, especially when it happens on rounds. Where did the peculiar medical tradition of “pimping” come from? How did it get its name? Is it even effective? And does it still have a place in modern medical education? Find out in Episode 12!

I’ll always remember my first time getting pimped, mostly because it was literally on my first day that I could possibly be pimped. It was my first day ever in a hospital, and my short white count was stuffed to the brim with bandages, suture kits, and more reference materials then I could ever read. This particular attending had a reputation, so I was on edge as my team examined our first patient together, an elderly man with a pseudocyst, with his a fluid accumulation that can form after a bout of pancreatitis. Outside the room, my attending pulled up his CT scan so we could look at the damage. He scrolled through to a large, dark circle where the pancreas usually is. “Now what’s that?” he asked. Well, that’s easy; pseudocysts are not subtle, plus we had been talking about it for the past 20 minutes. But a right answer only brought another, with increasingly obscure questions. Finally, I had to admit I didn’t know the insertion of the iliopsoas muscle. “Don’t they teach you this stuff in medical school?” he asked, and gave visibly perspiring Adam instructions to get back to him with some short presentation on the iliopsoas muscle the next day.

Pimping, I’m sure you’ve guessed, is a storied educational tool in American medical education. It essentially involves the attending physician publicly testing the bounds of learners’ knowledge on rounds, which is when the medical team meets to  discuss a patient’s condition. Ostensibly pimping is a noble pursuit based on the Socratic method. Note my focus of “ostensibly”. But before I get too much into my personal opinion, let’s talk for a second on the origin of the word  “pimp”. Obviously the most common definition is one who procures sex workers, and that origin is lost in time (it’s theorized to come from French pimper, meaning to dress elegantly, but the Oxford English Dictionary says this is merely a coincidence). Because English is a really, really weird language, pimp more recently has come to mean flashily decorating, a la “Pimp My Ride,” or when used as a noun it’s a compliment meaning an attractive, rich, and otherwise all-around-awesome man, a la the Fiddy song I played at the beginning. Patricia O’Conner, who runs the Grammarphobia blog and has published multiple books on our weird language, thinks that the medical use of the word comes from an alternative adjectival definition, similar to the same word in German, which means “insignificant, paltry, petty, or sickly”. It’s doesn’t take much of a stretch of the imagination to see how this could have basically changed to a verb that means “to make a medical student feel insignificant, paltry, petty, or sickly”. This use of pimp is also used in the military and improvisational theater to have roughly the same meaning — putting someone on the spot and making them look silly. All of this is a way to say, we don’t really know where the word came from. Or when it came from, really. All of my attendings, even the very wise (aka old) ones, refer to them being pimped as students. But despite that, the earliest reference in PubMed is in 1989 (in an awesome article I’ll get to in a moment).

The reason that I can say, “pimp my podcast”

So back to the purpose of pimping. Like I said, ostensibly pimping is a form of the Socratic method. Quick refresher there: named after the great philosopher Socrates and his dialogues, the Socratic method consists of the teacher asking questions in a dialogue with the student, slowly guiding them to the answer, correcting misconceptions and lapses in reasoning as he does. You can see how this is different from pimping almost immediately. Pimping rarely is a dialogue; it’s usually an attending peppering multiple learners with questions. And those questions, in my experience, are most often lists of trivia. When I was in medical school, students would exchange lists of “pimp questions”, since attendings would ask the same thing over and over (and some of those questions are of questionable veracity –as far as I know there’s no evidence that you can get a post-op fever from atelectasis, but I’m willing to bet every medical student has been pimped on that at some point). Some of the questioning borders on inanity, such as the attending who asks literally every location in the body an infection could hide. I’m not really sure that pimping on rounds, in the method it is traditionally practiced, is really that educational. So why is it practiced? My theory — and quick warning here, a strong burst of opinion is to follow — pimping reinforces the hierarchical nature of medicine. Pimping always rolls down hill — the attending can pimp the residents, interns, students, the resident can pimp the interns and students, the interns can pimp the students, and the students pretty much have to suck it up. It’s always in public, and depending on the setting, it can be quite humiliating. The ultimate faux pas in pimping is to mess up this order — for example, if a resident doesn’t know an answer, you should never ask the student. And don’t even think about pimping someone higher than you on the totem pole. If the true intent were education, why would these be the case?

Pimping can be so ridiculous that it just lends itself to parody, and to my great delight, basically the entirety of “pimping literature”, and that’s using the word literature very lightly, is dedicated to making fun of it. The first is an article in 1989, which I alluded to above, by Dr. Frederick Brancati called “The Art of Pimping,” in which he decries the death of an institution and provides a practical guide for new attendings to bring back the pimp.  “Proper pimping, “ he writes, “inculcates the intern with a profound and abiding respect for his attending physician while ridding the intern of needless self-esteem.” He provides a litany of made up quotes from medicine luminaries on the history of the subject, my favorite of which is a quote from William Harvey (who, as I talked about in Episode 9, first characterized the flow of blood in the heart) who lamented his students lack of enthusiasm: “They know nothing of Natural Philosophy, these pin-heads. Drunkards, sloths, their bellies filled with Mead and Ale. O that I might see them pimped!” Or his fake quote from Flexner, whose report made modern medical education in this country, writing about Osler, again a father of internal medicine: “Rounded with Osler today. Riddles house officers with questions. Like a gatling gun. Welch says students call it “pimping”. Delightful!” His guide advises five general categories for the ultimate pimp: arcane points of history, metaphysics, exceedingly broad questions, eponyms, and technical points of laboratory research, all of which I think I’ve been pimped on at some point And he outlines his method of inducting “Sudden Intern Disgrace” in any intern who tries to dodge a question. I highly recommend reading the whole thing. 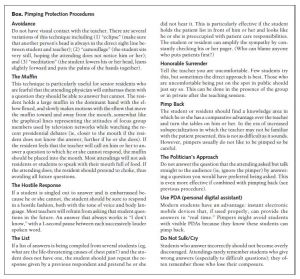 Detsky’s strategies to avoid being pimped. Via http://jama.jamanetwork.com/article.aspx?articleid=183639

JAMA published a follow up 20 years later by Dr. Detsky, which includes choice tidbits such as pimping protection procedures for learners. My favorite is the muffin, in which “the resident holds a large muffin in the dominant hand with the elbow flexed, and slowly makes motions with the elbow that moves the muffin toward and away from the mouth… If the resident feels that the teacher will call on him or her to answer a question to which he or she cannot respond, the muffin should be placed into the mouth. Most attendings will not ask residents or students to speak with their mouth full of food. If the attending does, the resident should present to choice, thus avoiding all future questions.” Of course, his article ends on a more serious note, “The lesson is to not take pimping too seriously and remember that often more can be learned from incorrect answers than from correct ones”.

You may have noticed that I am not a fan of the practice of pimping. But how do the most frequent victims — medical students — feel about it? A 2005 survey of fourth year medical students came to his conclusion:

All students noted the hierarchical nature of pimping, viewing it as a tool for attendings or residents to assess students’ levels of knowledge. Although some students experienced malignant pimping, humiliated by incessant questioning or questions inappropriate to their level of training, all the students in the sample were positive about pimping and its effectiveness as a pedagogical tool. Students divided pimping into two categories — good pimping, more similar to the Socratic method, whose goal is education, and malignant pimping, whose goal is humiliation.

So we have one study (and the only study I’m aware of) where students seem to like it. Still, the tide has started to turn against the pimp. New methods of using the Socratic method, such as the “one minute preceptor” have started to become more common on medical wards. A recent review in Academic Medicine entitled “Socrates was not a pimp” concludes that:

It is time to abandon the practice of pimping. Purposeful questioning that considers Socratic teaching methods and adult learning theories offers an alternative to pimping that removes its negative aspects and emphasizes improving learners’ critical thinking during their medical education. Being called on to answer questions in a group may remain anxiety provoking for some, but the method of questioning should not be abusive.

I couldn’t agree more. And good riddance. Dialectic learning is very effective — it’s how I learned some of my most important lessons in medical school and residency. But medicine is seemingly the only field that continues to use embarrassment and public humiliation as purposeful — and even celebrated — tools in training our next generation. Which is all to say, when I question my learners on rounds, I’ll try to be a little more like Socrates, and a little less like a P.I.M.P.