In 1991, two hikers near the Austrian-Italian border discovered the 5,000 year-old mummified body of Otzi the Iceman buried in a glacier. What have we learned about medicine from the Iceman? From a fungus-based first aid kit, ancient acupuncture , analysis of paleofeces, hints about his violent demise — and of course the good old fashioned physical exam — the answer is more surprising than you might think.

First, some background: Otzi was discovered on September 19, 1991, by two German hikers in the Otzal Alps, near Tyrol. Because made-for-TV documentaries do drama much better than I do, here’s a short video on his discovery (and breathless description of carbon dating):

So let’s go over the three major medical findings:

Otzi’s intestinal contents have been analyzied and found to have meat from the ibex and red deer, cereals, pollen, moss, and of course the whipworm. 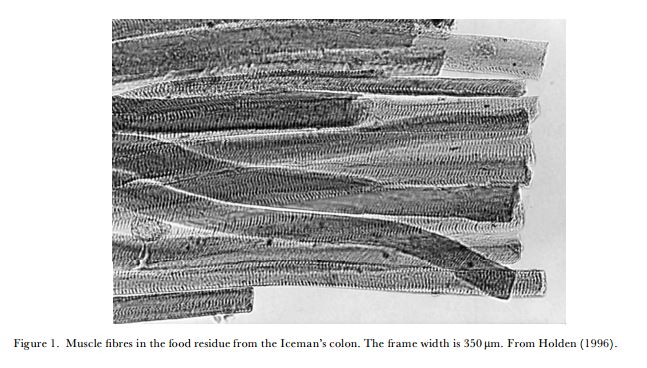 Eggs from T trichiuria were found in Otzi’s paleofeces. Also known as whipworm, this fellow infects about one billion humans in the world today, including humans in the rural southeastern United States.

Image courtesy of the CDC. Eggs on the left and the right; these were what was found in Otzi’s GI tract. The female whipworm, almost 4 cm long, is pictured in the middle.

Researchers found dried fungus on a leather thong near Otzi’s body. This was initially thought to be kindling to start fires. Mycological study revealed that the fungus was in fact Piptoporus betulinus, which is a potent anti-helminth and purgative. This image of P betulinus is literally from the American Mycological Association (the OTHER AMA). For more information: http://www.messiah.edu/oakes/fungi_on_wood/poroid%20fungi/species%20pages/Piptoporus%20betulinus.htm

Given the known medicinal qualities of P belutinus, Luigi Capasso argues in the Lancet that these bundles may have represented a first aid kit of sorts.

The discovery of the fungus suggests that the Ice Man was aware of his intestinal parasites and fought them with measured doses of Piptoporus betulinus. The toxic oils in the fungus were probably the only remedy available in Europe before introduction of the considerably more toxic chenopod oil from the Americas. The efficacy of chenoprod oil was increased by adding a strong laxative that caused expulsion of the dead and dying worms and their eggs.

Otzi has a lot of tattoos:

And while they’re located all over his body, they’re mostly located in areas that would be underneath his clothes. 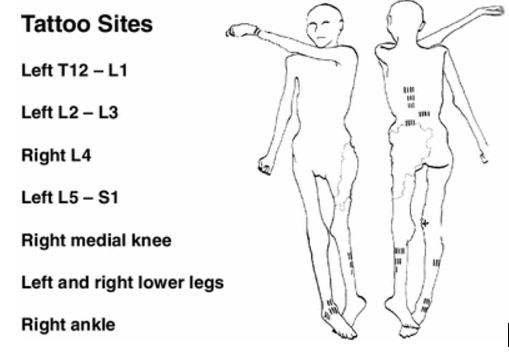 One group of researchers hypothesized that they roughly match up with the urinary-bladder meridian from TCM acupuncture. 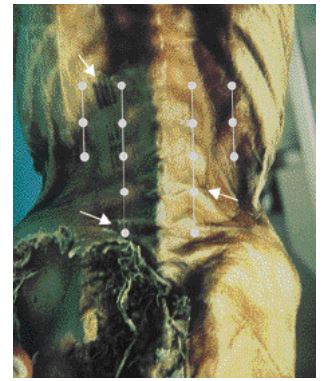 Another group of researchers came to a similar conclusion, mapping out Otzi’s chronic injuries and finding that the tattoos roughly corresponded to a sciatic distribution. 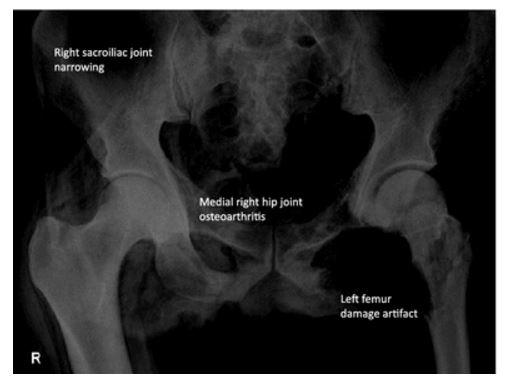 Life in the 4th millennium BCE was not easy.

Which led to the best physical exam I’ve ever seen documented:

“If we were able to observe the Iceman, the clinical signs could have included: an abnormal slow moving gait with possible limp related to the low back, the right hip, right knee or right ankle or a combination of any or all of these. We may have been able to detect low back tenderness to clinical palpation. We may observed that he had pain in a sciatic nerve distribution when he was asked to perform a right or left straight leg raise while lying on his back … We may have also observed possible lower leg calf gastrocnemius and soleus muscle atrophy.”

Three of Otzi’s fingernails were recovered, one of which clearly showed Beau’s lines. Beau’s lines are like tree rings, corresponding to times of great stress on the human body. 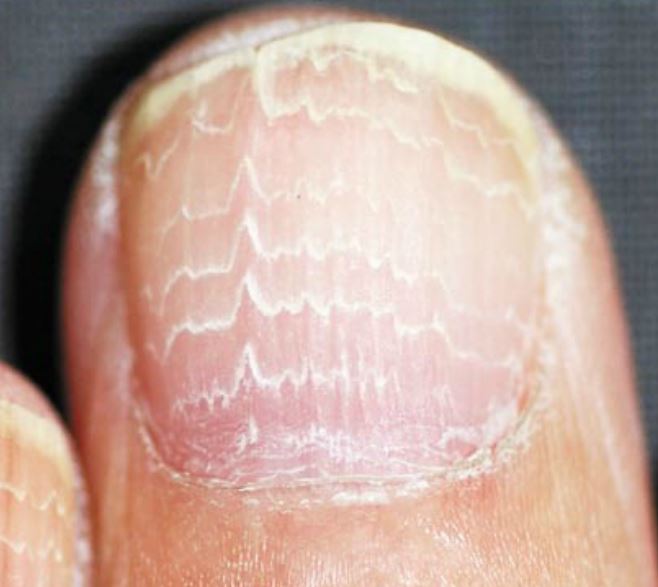 This is a particularly striking example from the NEJM, with the lines corresponding to chemotherapy cycles. Source: http://www.nejm.org/doi/full/10.1056/NEJMicm0906698

Otzi had three Beau’s lines, corresponding roughly to 16, 13, and 8 weeks before death, the last being the most prominent, suggesting a serious illness. 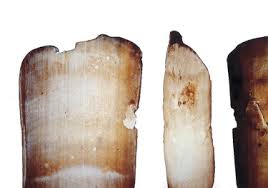 Otzimania is alive and well. Anthropologists have recreated what he would have looked like: And by studying his vocal cords, what he would have sounded like:

You can see the recreation at Cold Spring Harbor laboratory in New York.

And of course, don’t forget the Otzi movie!

You can read all about it on the Hollywood Reporter.